As good as it gets? The adequacy of retirement income for current and future generations of pensioners

Concerns about the future retirement incomes of today’s working age generations is ranked as the second-highest area of concern by the public, in relation to whether young adults will have a better life than their parents’ generation. Over the course of the 21st Century, pensioner household incomes have performed extremely well and pensioner poverty has seen a decrease of a third. However, this is set against a stagnation of working age incomes, resulting in households of working age having lower incomes than those of pensioners. Alongside these worrying income and wealth trends are cost pressures, later retirement ages, and the long-term decline in generous defined benefit pension provision.

These concerns were evident at the turn of the century and in 2006 the Pensions Commission conducted a review which resulted in two key recommendations, which have formed the basis of policy changes over the past decade, including a move towards a largely flat-rate State Pension and the introduction of auto-enrolment into private pensions.

Given the negativity surrounding the topic of fairness between the generations, the need for this in-depth look at the adequacy of retirement incomes is clear and essential for informing current intergenerational debates. This report, the 12th for the Intergenerational Commission hosted by the Resolution Foundation, presents detailed findings on the adequacy of retirement incomes for recent cohorts of retirees in Great Britain, along with projections of future adequacy both across and within generations for all of today’s working age adults.

The research analysis shows that income rates for recent retirees have improved relative to earnings within the working population; however earnings replacement rates have fallen short of the target for all but the lowest earners. Around three quarters of adults retiring during this century have had replacement rates below the adequacy benchmark for their level of earnings. It is not possible to directly compare these outcomes with the projections for future pensioners, however Resolution Foundation have found that overall future pensioners look set to achieve fairly similar levels of earnings replacement to those observed in recent years.

There is obvious interest in this report which very quickly gathered momentum, with a press review from The Guardian and the Telegraph very shortly after release. Both articles refer to the report as being welcomingly upbeat in contrast to the obvious pessimism of the public, but cautioned that the outlook remains highly uncertain.

The analysis carried out in this report developed on past analysis carried out by the Pensions Commission, the Department for Work and Pensions (DWP) and the Pensions and Lifetimes Saving Association. The research was enhanced in three ways; firstly by contextualising projections for future retirement income adequacy in Great Britain, in outcomes for recent cohorts of pensioners. Secondly, by focussing on the full distributions of outcomes within generations as well as differences between the average experiences of each; and lastly, Resolution Foundation also modelled future outcomes by considering sensitivity to certain economic and policy scenarios.

In the ‘backward-looking’ and ‘future looking’ projections, adequacy is defined in two ways: 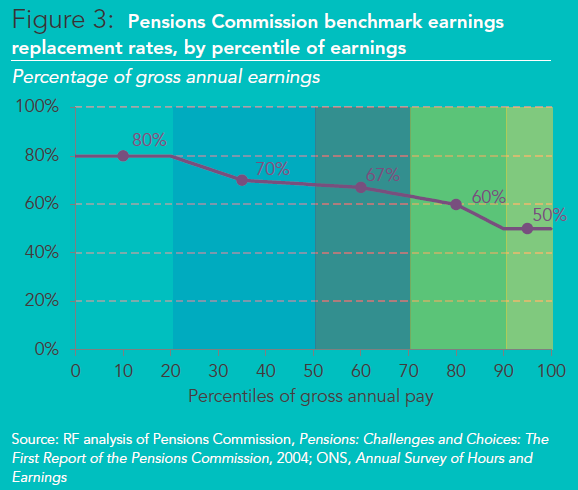 For their ‘backward-looking’ analysis of outcomes for recent cohorts of pensioners, Resolution Foundation used a combination of data from the British Household Panel Survey (BHPS) gathered by the Institute for Social and Economic Research (ISER) based at the University of Essex, and the Understanding Society (USoc) survey, its successor. This longitudinal data set was used so that incomes could be measured in the years after individuals had retired, and benchmark these against earnings for the same individuals in the pre-retirement period. Retirement was defined as the age an individual entered retirement, rather than when the individual reached state pension age. A minimum of three years of gross earnings above a minimum threshold of £6,000 in the pre-retirement period and at least a year in which the individuals have a private or state benefit income above £5,000 in the post-retirement period was required in order to calculate individual earnings replacement rates. These were calculated for each individual in the sample by dividing average state benefit and private pension income in the three years following retirement by average earnings income in the ten years prior to retirement.

For the ‘forward-looking’ projections, Resolution Foundation have developed a new model, the RF lifetime model, which allows for the projection of individual earnings trajectories based on panel data on employee pay, using data from two Office for National Statistics (ONS) surveys; New Earnings Survey (NES) and the Annual Survey of Hours and Earnings (ASHE). The combined data (NESASHE) provides different level of detail regarding occupational pensions in different years of the survey and allows for identification of the type of scheme since 1997, but only provides information about the contribution rates since 2005. Employee pension coverage and contribution rates are aligned with data from the historic series of the Occupational Pensions Scheme Survey (OPSS) in years before 2005.

Future earnings trajectories are calculated by applying a range of transition probabilities calculated from a series of logit regressions. These probabilities are then applied to individuals to project forward an earnings path in each future year to retirement. Future occupational pension coverage and contribution rates are projected forward from the 2016 data. This lifetime earnings and pensions contribution is then summarised and provided to the Pensions Policy Institute (PPI) to produce a projection of retirement income.

The PPI dynamic model has been applied to the NESASHE derived profiles, and projects retirement cash flow outcomes for individuals, assuming retirement at state pension age. The future economic assumptions have been derived from those published by the Office for Budget Responsibility (OBR) in their Economic and Fiscal Outlook and Fiscal Sustainability Report. Therefore, the model is capable of projecting variations on the current state pension system framework, and incorporating behaviour assumptions. 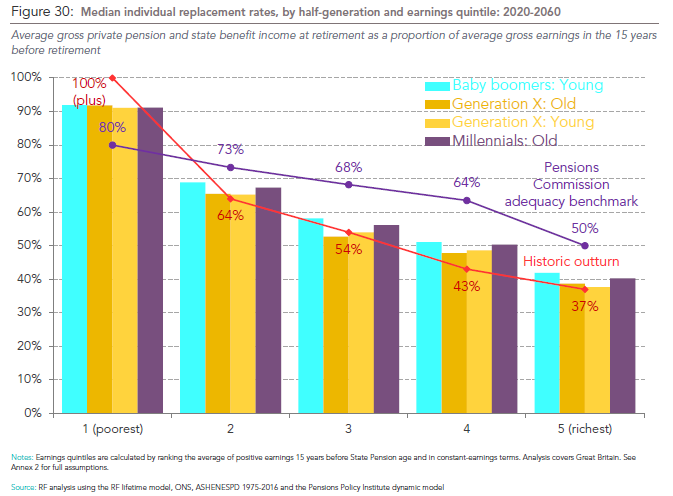 The report notes that the projections are too uncertain to be considered projections of what will come, and should instead be used as a likely indication of differentials in retirement income adequacy for future generations of pensioners. Resolution Foundation has also modelled the impact of other scenarios reflecting possible changes to policy or the economy. The possibilities modelled are:

In conclusion, the report states that the replacement rates projected are very dependent upon the level of future State Pension and the degree of auto-enrolment coverage, and although the performance of the economy does not directly affect the earnings replacement rates, this will be dominant driver of income levels for future pensioner cohorts.

The analysis carried out shows that policies being currently implemented have prevented deterioration in outcomes across future cohorts of pensioners, but that ambition for adequacy earnings replacement basis appear to remain quite far out of reach. The Intergenerational Commission will reflect on this analysis alongside the range of other evidence on generational living standards outcomes in the coming months, and consider how recent policy progress can be bolstered and what further changes may be needed.

Resolution Foundation note that one of the key considerations for the Intergenerational Commission will be the multiple ways in which policy changes in the coming years can boost living standards in retirement for future generations of pensioners. This will also be a key aspiration for policy makers, particularly in the context of deeply concerning generational living standards trends in the labour and housing markets.

The report has also gone on to inform the Department for Work and Pensions (DWP) “Automatic Enrolment Review 2017: Maintaining the Momentum” policy paper. As a result of this piece of analysis, the DWP has confirmed that the age at which employees are required to be auto enrolled by their employers is to be lowered from 22 to 18. Further recommendations from this policy paper include changing the automatic-enrolment framework so that pension’s contributions are calculated from the first pound earned rather than the current lower earnings limit; and removing the entitled worker category, currently applied to those workers in the UK, earning less than £5,876 per year.

The Intergenerational Commission is run by the Resolution Foundation and was set up to explore the questions of intergenerational fairness which is fast becoming a priority. In order to understand and improve these issues, influential leaders from business, academia and policy making have been brought together to devise a means of repairing the social contract between generations.

The report has gathered a lot of interest, which has resulted in multiple mentions in media releases. Both the Telegraph and The Guardian reported on this research commenting on the upbeat nature of the overall the message. Both note however, that this is still highly uncertain, with The Guardian stating “behind this relatively rosy forecast lies a number of assumptions about how auto-enrolment will work in coming years. Resolution assumed that the majority of people will stay in the scheme, despite the big increase in contributions that will be required from April next year, when they increase from 1% to 3% of salary, then 5% the year after”.