Long-Term Unemployment and the Great Recession: Evidence from UK Stocks and Flows

This research article was written by Carl Singleton, a postdoctoral research fellow in economics at the University of Edinburgh. Within the opening abstract, Carl states that “Long-term unemployment more than doubled during the United Kingdom’s Great Recession.” The aim of this research paper was to describe how the persistent rise in long-term unemployment (LTU) during the UK’s Great Recession came about.

The Great Recession is widely defined as the period of general economic decline observed in world markets during the late 2000s and early 2010s, although the scale and time period of recession varied between countries. ONS defines a recession as a period of two consecutive quarters of negative Gross Domestic Product (GDP) growth. The UK’s most recent recession is denoted by the grey shaded area within the chart below. 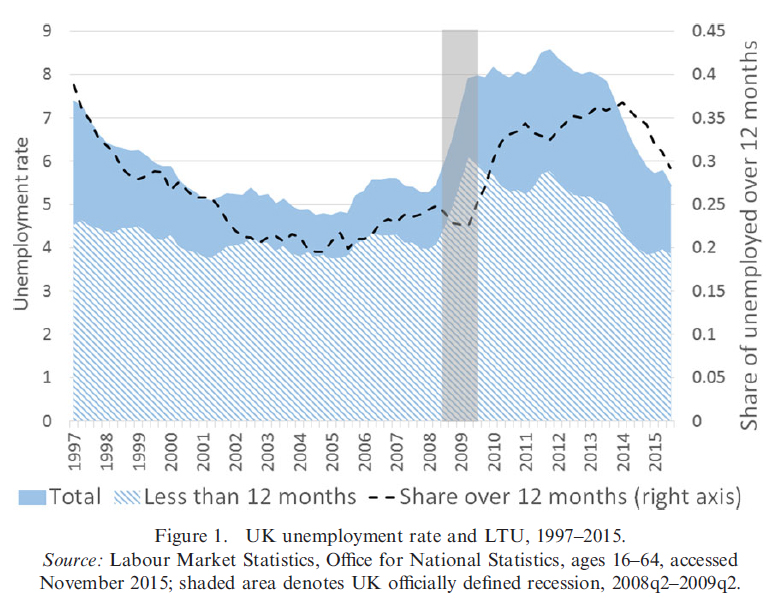 There has been renewed international interest in the rise of the average length of time workers remain unemployed during recessions, which can persist even while the level of unemployment is falling rapidly following a major economic downturn, as shown above in the chart for the UK since 2008. This pattern of labour markets can be referred to as counter-cyclical, and is a topic that has long been of interest to those studying European labour markets. The particular driving force behind this renewed interest, however, is the significant and less usual rise in US unemployment durations since the financial crisis of 2007-08.

Using the Office for National Statistics (ONS) Labour Force Survey (LFS) and Annual Population Survey (APS), Carl discusses how much of the UK experience of LTU during the Great Recession can be accounted for by changes to the composition of unemployment. This is defined as the prevalence of personal and work history characteristics among the unemployed. The flows between employment, inactivity and unemployment durations are then identified, to analyse which of these characteristics are most associated with the rise of LTU and its persistence.

This article reinforces results found previously for the US labour market, that the labour force participation margin is likely to be crucial in accounting for the observed amplification of long-term unemployment during recessions. The results from studying labour market flows data lead to a strong suspicion that a shift in the composition of the unemployment pool towards more attached workers (i.e. those more likely to continue searching and looking for work rather than becoming discouraged or inactive) could explain most of the UK’s recessionary rise in LTU.

The findings from this paper were presented by Carl and discussed at the Work, Pensions and Labour Economics Study Group (WPEG) in 2017.

The possibility that the changing composition of unemployment could account for LTU is assessed. Using the APS, Carl considers the change in unemployment over three defined periods: during the great recession (2007-2010); during and after the Great Recession (2007-2013); and 2004-2007 to serve as a baseline.

Carl then identifies which of the flows between employment, inactivity and unemployment durations can account for the rise and persistence of LTU, and thoroughly explores how underlying flows have determined patterns of LTU over the past two decades. The methodology from previous research carried out by Elsby et al. (2015) is followed closely, by extending their stocks-flow decomposition from three to five labour market states. These states are defined as:

Estimates of the quarterly gross flows between these five labour market states were derived using the two-quarter longitudinal datasets between the fourth quarters of 1997 and 2014.

The results of the research suggested that a shift in the composition of the unemployment pool towards more attached workers could explain the UK’s rise in LTU. This was supported by the particular pattern of changes in worker flows during the Great Recession. However, counterfactual analysis of the labour market stocks and contributing flows, along some observed characteristics expected to be correlated with attachment, have not shown this.

The research reinforces that the participation margin is likely to be crucial in accounting for the observed amplification of long-term unemployment during recessions. Carl notes that an interesting extension of this research would be studying how important is the dependence of unemployment exit rates on individual employment history over the economic cycle.

This research summarises that “only a small fraction of the persistent increase of LTU can be accounted for by the changing composition of unemployment across personal and work history characteristics. Through the extension of a well-known stocks-flows decomposition of labour market fluctuations, the cyclical behaviours of participation flows can account for over two thirds of the high level of long-term unemployment following the financial crisis, especially the pro-cyclical flow from unemployment to inactivity. The pattern of these flows and their changing composition suggest a general shift in the labour force attachment of the unemployed during downturn.”

The paper concludes that levels of attachment are challenging to identify from observables. The research references work by Alvarez et al (2016), who modelled transitions between employment and non-employment, finding that unobserved heterogeneity across workers, affecting their degrees of negative duration dependence in exit likelihood, and the resulting dynamic selection of the stocks over time, must play a significant role in the evolution of the aggregate job finding rate from non-employment. It could be an excellent direction for future research to consider whether this extends to unemployment to inactivity flows, and whether the LTU increase during recessions can then be accounted for in this way.

Carl presented this work at the University of Sheffield’s recent Work, Pensions and Labour Economics Study Group (WPEG), which is jointly hosted by the Department for Work and Pensions (DWP) and a large number of their representatives and analysts were present.