At the time of writing, the UK has no official measure of poverty. As a result, there is no effective way to track the progress of efforts to tackle the causes of poverty, reduce poverty, or improve the lives of those experiencing poverty. In addition, policymakers and politicians cannot be effectively held to account for decisions and measures in this area.

The Social Metrics Commission was founded in 2016 to develop a new approach to poverty measurement for the UK. In response to the absence of an official measure, its ambition was to develop metrics that both better reflected the nature and experiences of poverty that different families in the UK have, and could be used to build a consensus around poverty measurement and action in the UK.

Formed and led by the Legatum Institute’s CEO Baroness Stroud, the Commission is totally independent, drawing members from across the political spectrum and with various relevant backgrounds. A list of our 15 Commissioners can be found here.

In September 2018, we produced our first report, which set out how the approach to poverty measurement could be improved in the UK and elsewhere. The Commission’s 2018 report was the first time this framework had been used to present a detailed articulation of the nature of poverty in the UK. Using data from the Family Resources Survey, Households Below Average Income and Understanding Society to operationalise the measure, our findings suggested that the same number of people were in poverty in the UK as previously thought. However, within this overall population, the Commission’s results suggested significant changes to the groups identified as being in poverty and also shed greater light on the depth, persistence, and Lived Experiences of poverty.

We have since published two annual reports, in July 2019 and July 2020, which included the latest available data as well as methodological updates. In December 2019, we also published a report laying out a framework for how more accurate equivalisation scales could be developed. Most recently, in August 2020, we released a report detailing the likely scale and nature of poverty impacts coming from the economic fallout of the Covid-19 pandemic in the UK.

A major impact of the Commission’s work has been the Government’s commitment to developing an Experimental Statistic based on the Commission’s measurement framework. Following the Government’s announcement in May 2019, our team has continued to support the Department for Work and Pensions’ work to develop these statistics. Developing a new Experimental Statistic would be a major step towards the Commission’s ultimate goal of the development of new official poverty statistics in the UK, which can be used to guide and prompt policy action.

The Commission is hosted by the Legatum Institute, which makes available the resource of its Centre for Metrics, and is supported by the Legatum Institute Foundation. The Commission’s work would not be possible without that support, and the research, editorial and functional independence that has underpinned it. Throughout the duration of it’s work, the Commission has also been generously supported by the Joseph Rowntree Foundation, Calouste Gulbenkian Foundation (UK Branch), Garfield Weston Foundation, Oliver Wyman, Jon Moulton, Stuart Roden, the PF Charitable Trust and Mr Sanjit and Mrs Sangeeta Talukdar.

The Commission’s poverty metrics include a core measure of poverty, as well as broader measures on the depth, persistence, and Lived Experiences of poverty.

The core measure looks at the extent to which the material resources that someone has available to them now are sufficient to meet the material needs that they currently have. Operationalising this allows us to understand how many people are in poverty and who they are.

You can find the full details of our methodology in our 2018 report.

How is our poverty measure different? 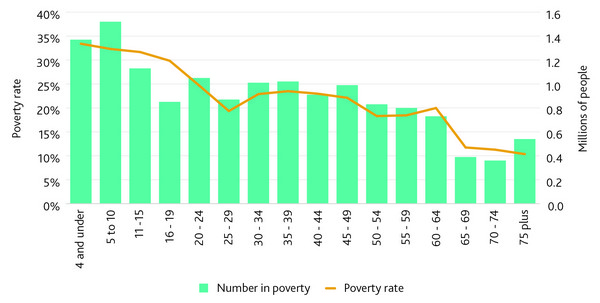 Figure 3: Poverty rates and number in poverty for the UK population, by age group (2018/19)Larger version | Data from figure 3 in accessible format 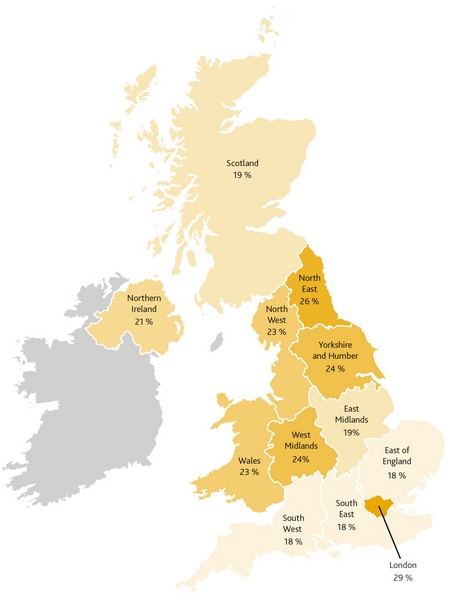 The Commission’s Lived Experience Indicators show that those in poverty experience worse outcomes than those not in poverty:

Downloads of the results tables containing summary data for the figures that appear in each of our reports are available in Excel and PDF formats:

The Commission also makes its code freely available, with the aim that others will build upon its work.

Measuring poverty is vital if action is going to be taken to improve the lives of those currently living in, or at risk of falling into, poverty. It is also essential to ensuring that those individuals, families, communities, and areas of the UK that have historically been left behind are supported to improve their situation. In addition, as the full extent of the Covid-19 crisis unfolds, measuring poverty will be central to ensuring that the long-term economic and social impacts of the crisis are tackled. To that end, the Commission believes that, with existing data and research, the approach we have developed represents the most accurate measure of poverty, which is also most likely to build consensus and drive action on poverty.

However, the Commission also recognises that creating a new measure of poverty is only the start of what needs to happen. We will continue to support efforts to develop a new Experimental Statistic based on the Commission’s approach, as well as shining a light on areas that still warrant further exploration. The Commission has already outlined the steps needed to develop a new approach to equivalisation in the UK, and will continue to argue for improved survey and administrative data (including on debt and the costs of social care). We will also work to support the development of a more comprehensive approach to capturing the extra costs of disability.

In taking this work forward, the Commission will work with the widest range of stakeholders possible to ensure that, once fully developed, the Experimental Statistic can form the basis of a consensus view on poverty measurement across the UK Government, the Opposition, the Office for National Statistics, policymakers, and those researching and working with people in poverty. Without this, a large part of society risks being left further behind without the support that they need to improve their lives.

Since the Commission’s work began in 2016, our ultimate goal has been to develop new poverty metrics for the UK which both have long-term political support and effectively identify those who are in poverty. In a field of policy and politics that is divisive and that has seen little change of practice or approach in the last two decades, in the space of just four years the nature of the debate has fundamentally shifted.

Our work has been welcomed by commentators and politicians from across the political spectrum as well as the poverty lobby, experts and researchers, and we have undertaken significant engagement across the UK’s four nations, with parliamentarians, experts, officials, poverty experts and academics.

In November 2018, the UN Special Rapporteur on extreme poverty and human rights, Professor Philip Alston, in a Statement on his visit to the United Kingdom, encouraged the UK Government to adopt the Social Metrics Commission’s poverty measure, saying:

“The bipartisan Social Metrics Commission’s New Poverty Measure represents an attempt to create a single comprehensive measure of poverty, and these are the numbers I reference here unless otherwise noted. I would urge the Government to respond to the Commission and adopt its approach, which has received an impressive degree of cross-party support.”

In February 2019 the All Party Parliamentary Group on Statistics, in conjunction with the Royal Statistical Society, held a meeting to discuss the new poverty measure developed by the Social Metrics Commission.

In May 2019, the DWP announced that it would create Experimental Statistics in 2020 based on the Commission’s poverty measure.

In June 2019, the House of Lord’s debate on inequalities included references to the importance of the measure developed by the Commission.

In July 2019, the Work and Pensions Select Committee published its report on the welfare safety net, recommending that the Government adopt the Commission’s approach as its “…official, central measure of poverty”.

Tynwald: the Isle of Man’s Government

In July 2019, the Commission presented evidence to the Select Committee on Poverty for Tynwald, the Parliament of the Isle of Man (audio recording). The Select Committee compared the Commission’s measure with 10 other approaches to measuring poverty and found it to be the closest fit with their requirements for understanding poverty. Consequently, its First Report: Poverty Definitions & Data 2019-2020 recommended that the Isle of Man Government adopt and measure the Commission’s measure. These recommendations were subsequently passed by the Tynwald.

A question was raised as to whether the States of Jersey would be adopting a measure of poverty based on the Commission’s work to be comparable with the planned UK Department for Work and Pensions Experimental Statistics.

Policy in Practice, in its report Financial Resilience and the Transition To Universal Credit, devised an indicator called ‘Income After Costs’ to determine financial vulnerability, which is based on the Commission’s measure.

The IFS: Living standards, poverty and inequality in the UK: 2019

The Trussell Trust: Introduction to a Study of Poverty and Food Insecurity in the UK

Full fact: Poverty in the UK: a guide to the facts and figures

The Independent: What is this new UK poverty measure and what was wrong with the old one?

The Guardian: More than 4m in UK are trapped in deep poverty, study finds and Nearly half of BAME UK households are living in poverty

Full Fact: Poverty in the UK: a guide to the facts and figures and We all deserve a better debate on poverty

ConservativeHome: Coronavirus has hit those in poverty hardest. The Government must support employment, fast.

The Social Metrics Commission website also records responses from the community to the development of the poverty measure and its latest report.