Data analysis to inform research on the size, scope, dynamics and geographic clusters of digital tech industry activity in the UK

Frontier Economics was commissioned by Tech City UK, who planned to update its annual report; a data-rich analysis of the UK’s thriving digital economy and tech clusters. Frontier Economics assisted with the collection, tabulation and analysis of specific business sector datasets for the preparation of the report, “Tech Nation 2017”. The report describes:

Tech City UK was launched by the UK Prime Minister in 2010 to support the East London tech cluster, and the organization has grown to now support the development of the digital tech sector across the UK.

The report was published in March 2017 and highlights key findings for the UK, compares headline figures for 30 cluster cities and includes interactive data visualisations based on the results. The report hails the UK as the digital capital of Europe, topping the charts on digital tech talent, collaboration and investment, securing two times more in investment than any other European country. The additional headline figures from the research also highlight the vast growth of the sector, which now has an annual turnover of £170bn and makes a £91bn contribution to the UK economy.

The success of the report has sparked curiosity among many readers, including the Department for Culture, Media & Sport (DCMS) and the Greater London Authority (GLA) who have requested additional information on the findings.

Frontier Economics used a combination of ONS administrative and survey datasets – Business Structure Database (BSD) and Annual Business Survey (ABS) to develop estimates on the size and geographic location of industries and sub-industries for the UK’s “digital tech” industries. Location quotients (LQ) were produced to quantify how concentrated the high-tech industries were in a region as compared to the nation.

The project also added two new bits of tabulation (from earlier Tech Nation reports) – generating estimates of firm entry and exit, and looking at so-called high-growth firms which may be defined as either falling within a certain percentile growth distribution or achieving certain growth targets over a defined period of time. The data was used to show trends in levels, growth, and geographic concentration of the digital tech sectors throughout the UK.

The key findings for the report show that the UK is the digital capital and clear leader of Europe when it comes to tech investment, digital skills and collaboration within ecosystems. The report analysed more than 1,000 data points, over 2,700 responses from an online survey (carried out by Tech City UK) of digital tech founders and employees and incorporated insights from over 220 community partners across the UK. The report describes the following key findings: 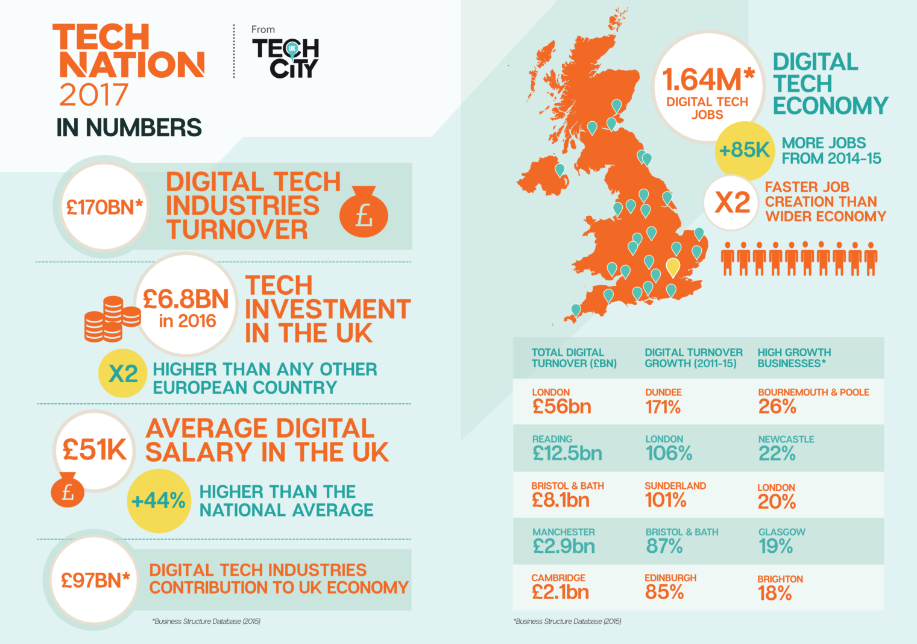 Tech Nation 2017 confirms that the digital tech sector is one of the UK’s economic success stories. During her Tech Nation 2017 report launch speech, the Secretary of state for DCMS, Karen Bradley noted that “the combination of highly paid jobs and inward investment is why digital sits right at the heart of the Government’s Plan for Britain – to deliver a country that is stronger, fairer, more united, and more outward-looking than ever before”.

With 1,000+ data points, 61 tech company case studies and 260+ community partners, Tech Nation 2017 is the most comprehensive report to date on the digital tech economy. It has quickly gained momentum, generating the following interest:

As well as the data analysis carried out by Frontier Economics, Tech Nation 2017 also contains supporting feedback captured in a survey, and supplementary data from a range of sources, including Burning Glass salary analysis and Pitchbook investment data. Together these analyses have produced six recommended areas for focus;

The UK Prime Minister, Theresa May has stated that Britain already leads the world when it comes to new technology and states that “through close co-operation between government and our tech industry we will help to ensure that Britain remains one of the most competitive places in the world to start and grow a tech business. We will expand the scope of our digital tech industries, funding Artificial Intelligence, robotics, 5G, smart energy and more. We will broaden their reach across the UK, create new Institutes of Technology, and reinvigorate STEM [science, technology, engineering and mathematics] and digital education to equip young people for the workplaces of the future.”

There has been considerable interest in the report from a range of organizations, including local authorities, academia and businesses. There is interest in doing further research to expand the analysis to include all local authority areas and Tech City UK is in discussion with ONS about taking this and further analysis forward using ONS research data.