The growing importance of inherited wealth

New research is showing that the wealth of younger generations is now falling behind the wealth of their predecessors at a similar age. Rising house prices and an uncertain job market have impacted the wealth levels of the different generations, making receiving inheritances much more important for the current young generations than it was for older generations. However, there are concerns about inequality, as inheritances are very unequally distributed, and social mobility, since the growing size and importance of inheritances will benefit the children of wealthier parents (IFS, 2016).

The report ‘Inheritances and Inequality across and within generations’ by the Institute for Fiscal Studies (IFS) and funded by the ESRC-funded Centre for the Microeconomic Analysis of Public Policy (grant number ES/M010147/1) analyses inheritance distribution and its potential impact on inequality across generations.

Figure 1: Percentage of individuals who either have received or expect to receive an inheritance, for those born in different decades (Source: IFS, 2016) 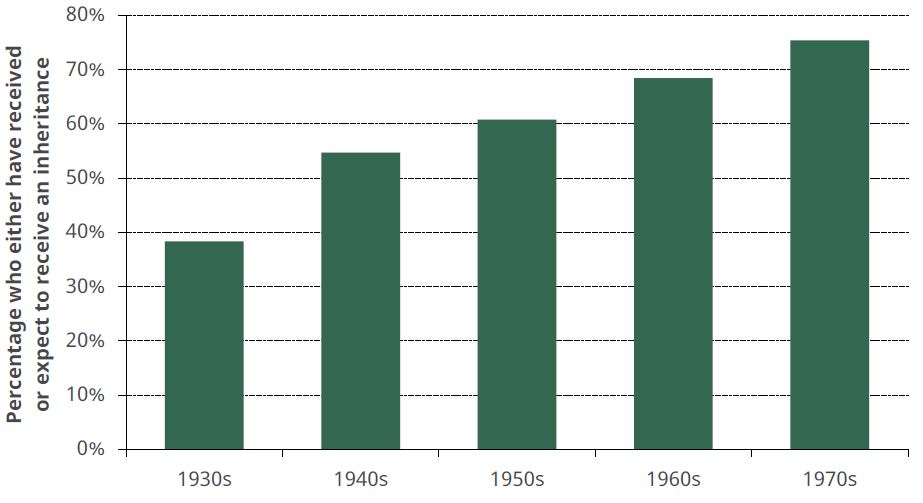 Findings also reveal that the wealth of elderly households is extremely unequally distributed. The top half of households where all members are 80 or older hold 90% of the wealth, and the top 10% hold 40% of the wealth. Hence a ‘lucky half’ of younger households look likely to get the vast majority of the inherited wealth from the older generation. Moreover, in younger generations, those with higher current incomes are significantly more likely to have received an inheritance or expect to receive one at some point in future.

The report analyses the potential impact inheritances can have on inequality within generations of people who are currently of working age. First, it examines the patterns of actual inheritance receipt among pensioners, using detailed survey data on older individuals linked to their lifetime earnings histories from administrative National Insurance records. Second, it combines information on the distribution of current wealth among elderly households and how younger generations’ expectations of receiving inheritances relate to their income, to investigate how the inheritances younger generations receive in future will affect inequality among that group.

The report used two datasets available from the UK Data Service: the Wealth and Assets Survey and the English Longitudinal Study of Ageing (ELSA). These datasets are used to analyse the wealth holdings of elderly households, their intention to leave that wealth to future generations, and younger generations’ expectations of receiving inheritances, to document the growing importance of inheritances.

The IFS’s report suggests that today’s elderly have much more wealth to pass on than their predecessors, primarily as the result of rising homeownership rates and rising house prices. At the same time, today’s young adults will find it harder to accumulate wealth of their own than previous generations did, due to the sharp fall in homeownership, the dramatic decline of defined benefit pensions in the private sector and the stagnation in household incomes. Together, these trends mean inherited wealth is likely to play a more important role in determining the lifetime economic resources of younger generations, with important implications for inequality and social mobility.

Institute for Fiscal Studies (2017) ‘Inheritances and Inequality across and within Generations’, IFS Briefing Note BN192. Available from: https://www.ifs.org.uk/uploads/publications/bns/bn192.pdf

Lianna Brinded (7 January 2017) ‘Here’s why millennials need to inherit rather than earn their wealth’, Business Insider UK. Available at http://uk.businessinsider.com/ifs-inheritances-and-inequality-report-house-prices-cost-of-living-debt-2017-1