This study, conducted by Dr Philip Wales and colleagues at the Office for National Statistics (ONS), aimed to understand the drivers of the UK’s ‘Productivity Puzzles’. The study addressed a UK data gap by producing a new dataset combining information from ONS’ Annual Business Survey (ABS) and Her Majesty’s Revenue and Customs (HMRC) trade in goods declarations. The study used the new dataset to examine the trading behaviour of businesses of different sizes, ownership types and in different industries.
Results of the study show that large businesses, foreign-owned businesses and those in the manufacturing, wholesale and retail industries are more likely to have trade in goods than other businesses. The study also shows that businesses with international trade in goods have higher levels of productivity than those that don’t, by 40%.

The study linked transactions level trade in goods data to the UK’s business register. The match failures were then examined, ensuring that results were not biased by non-random non-matching.

Although a considerable challenge, a range of new approaches were developed, linking VAT-unit trade data to information about business collected by ONS, which was extensively checked and triangulated against survey sources. The linked trade in goods-IDBR dataset was then matched to the ABS to analyse productivity.

To ensure results were clear and that results used the input data correctly, a large range of experts external to ONS were consulted ahead of publication. 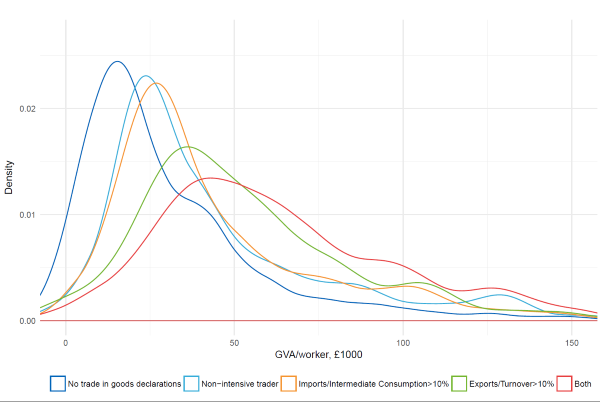 The results of this work have fed directly into statistical production at ONS, providing input for the development of UK trade policy after departure from the European Union. The data has been mobilised by ONS’ trade development teams, progressing more detailed trade statistics more quickly using methods from the study.