What questions were asked on Age and year of arrival in the UK? 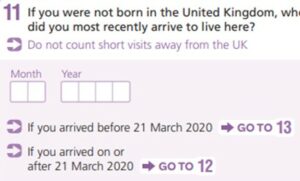 In England and Wales individuals who arrived in the last year were asked about how long they intended to stay.

The combination of answers is used to derive variables that show the age and year of arrival in the UK.  If the planned length of stay is less than 12 months the respondent will be classed as a short-term resident.

How does it compare across nations?

The responses for Northern Ireland include the year of arrival there.

What impact might the COVID pandemic have had on Age and year of arrival in the UK?

Whilst the pandemic might have affected international travel it is unlikely to have had an impact on those who were living in the UK at the time of the census.