The 2021 Census outputs will contain the results of questions about sexual orientation and gender identity, which have been asked for the first time in censuses in the UK.

However the extent to which reporting for small areas etc will be possible is to be determined, as a balance will be struck between the level of detail and the risk of disclosure.

This is true for any variable, especially ones with skewed distributions (that is, the majority of people will fall into one category, with lower counts in other categories), and all the more so for questions about sensitive personal characteristics.

Questions on gender identity and sexual orientation are rare in censuses in general. The 2021 Census of Canada included questions on both sex at birth and gender, and reported their first results in April (“1 in 300 people in Canada aged 15 and older are transgender or non-binary”), making it the first census to report detailed results of this type (although the Canadian census itself was captured a few weeks later than those in England and Wales or Northern Ireland).

Earlier censuses have included a ‘third gender’ option – Nepal in 2011, India in 2011 and Pakistan in 2017, with less detailed reporting of results.

What questions were asked on Sexual Orientation and Gender Identity?

In England and Wales, the 2021 Census contained an optional question for persons aged 16 or over (question 26), which asked: “Which of the following best describes your sexual orientation?”. The paper and online forms noted that “This question is voluntary”.

The response categories were: “Straight/Heterosexual”, “Gay or Lesbian”, “Bisexual”, and “Other sexual orientation, write in” (with space provided for an answer). This is a similar set of categories to those used in Understanding Society (the response categories in the latter however included a specific ‘prefer not to say’ tick box, rather than being directed to ignore the question entirely.

In Northern Ireland, a ‘prefer not to stay’ tick box was provided, with the question wording (Q24) otherwise being the same. The same wording was also used in the equivalent question in the 2022 Census in Scotland (with no ‘prefer not to say’ tick box), albeit with a slight difference that the question in Scotland contained the text “Answer only if you are aged 16 or over”, whereas in England and Wales and in Northern Ireland, the forms used an separate routing question of the form ‘if you are 16 or over go to question X; if you are 15 or younger go to question Y…’. 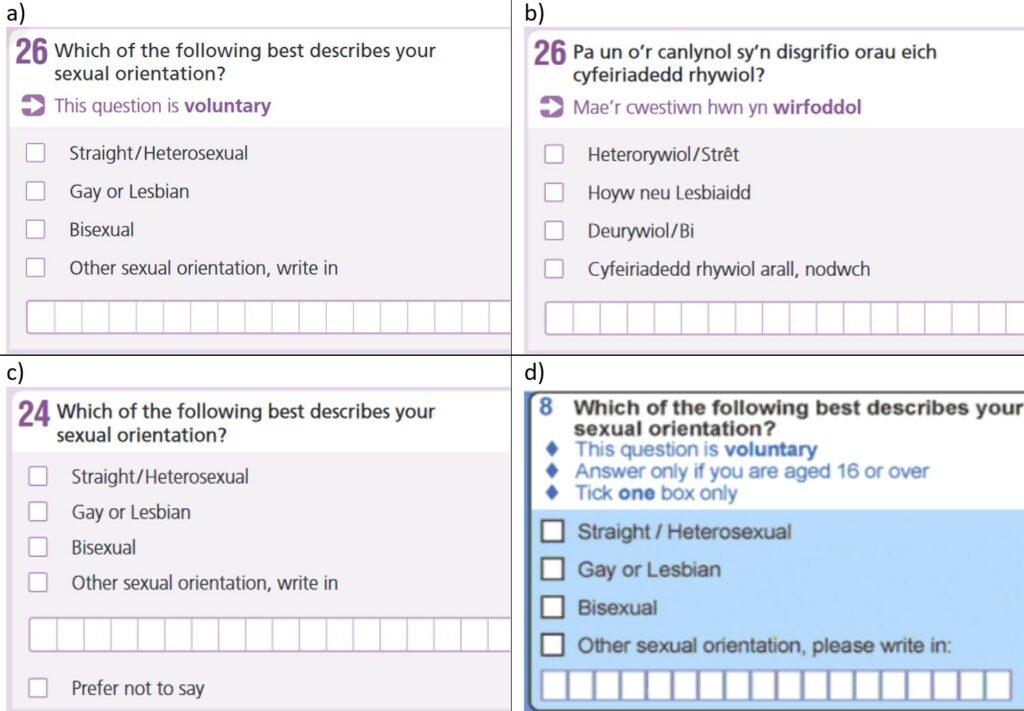 Whereas the sexual orientation question was asked in the censuses across the UK with very similar wording, the form of the gender identity questions differed considerably.

The most significant difference was that no gender identity question was asked in Northern Ireland. In all censuses the usual question on sex was included, with binary response categories “Female” and “Male” only. The relationship between the sex question and the gender identity question is important, and was the subject of legal proceedings in both England and Wales and in Scotland.

In Scotland, the gender identity question Q4 followed immediately after the sex question. The wording was “Do you consider yourself to be trans, or have a trans history”. An explanatory note stated ” Trans is a term used to describe people whose gender is not the same as the sex they were registered at birth”. The response categories were “No” and “Yes, please describe your trans status (for example, non-binary, trans man, trans woman)”. Thus as well as reversing the no/yes perspective when compared to the question in England and Wales, the wording also suggested specific descriptors.

How does this compare to previous censuses?

There have been no comparable questions to those on gender identity in previous censuses: prior to 2011 no guidance was given regarding the sex question, and in 2011 online guidance told people to answer as they identified.

However, there were no questions to indicate a change from the sex recorded at birth. Similarly, there have no previous questions about sexual orientation: one was considered for the 2011 Census, but was not included as it would thought it might affect response.

From 2011 onwards, the wording of the marital status question was updated to include same-sex civil relationships, although this of course is not the same as a general question about sexual orientation.

The level of response to the voluntary question on religion varies by location and by personal characteristics, and it is clear that not responding is not necessarily the same as indicating that one has no religion.

A new feature of the 2021/22 Census round, compared to previous censuses in the UK, was the ability to complete – typically online – an individual form, as a supplement to an existing household form. This was noted in the guidance for the sexual orientation and gender identity questions. An individual form allow respondents to give alternative answers to any of the questions on the form, although the use case most often discussed was for the questions on sexual orientation, gender identity, and religion.

As noted above, it is currently unclear as to the level of detail with which results will be reported. Existing estimates of the proportion of people who are trans, for example, vary, and the census itself will be the mechanism by which ONS (and other agencies) produce new observations, which in turn then dictate the level of detail that can be used in the reporting of results.