Internal migration in the 2021/22 Census

What questions were asked on Internal migration? 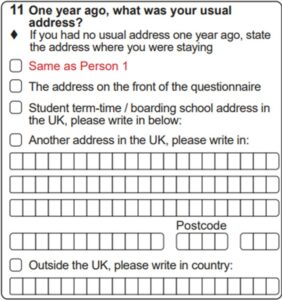 The response is used to derive the variable where someone lived one year ago – the same address, a student address, somewhere else in the UK or outside the UK.  It will also be available as a geographical zone in the flow data release to support analysis of patterns of internal migration.

The same information is available.

What impact might the COVID pandemic have had on Internal migration?

There is some evidence of higher rates of internal migration, particularly out of urban areas during the pandemic. The extent to which this pattern is sustained will be able to be better understood when the mid-year 2022 population estimates are released.