What questions were asked on Religion?

In England and Wales, a choice of seven answers including the option for no religion were included.  There was also an‘other’ option which prompted a write-in response.  In Scotland there were three Christian options (Church of Scotland, Roman Catholic and other Christian) and Pagan. 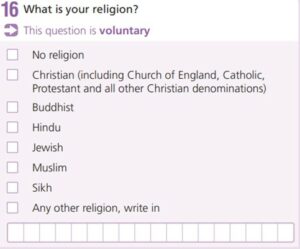 In Northern Ireland there were two questions one on what religion you belong to, the second on what religion you were brought up in.  The stated options were all Christian with an ‘other’ write-in option.  ‘None’ was placed below this. This question was not marked as voluntary unlike the other UK countries. 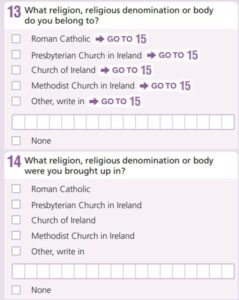 There will be summary categories in line with the question and a detailed small population table.  The draft specification for England and Wales is shown below.

The information is similar to the 2011 census

How does it compare across nations?

What impact might the COVID pandemic have had on Religion?