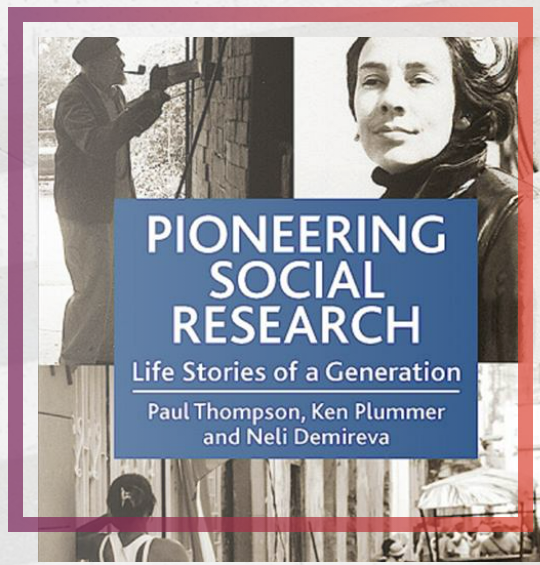 The team behind the Pioneers of Social Research project – a unique resource based at the UK Data Archive – have published a new book on the birth of modern sociology.

Pioneering Social Research: Life Stories of a Generation publishes in-depth interviews with 58 academics, whose field studies and methodologies established sociology as an academic discipline in Britain. The interviews were conducted from 2009 to 2018 by co-author of the book and Emeritus Professor of the University of Essex Paul Thompson, as part of various projects funded by the British Academy and Leverhulme Trust (brief biographical notes on the interview subjects are available on the UK Data Service website, with clips from the interviews available on Youtube).

The book focuses on studies undertaken between 1950 and 1990 – the post-war period seeing a huge expansion in sociological research.  Via the interviews, authors Professor Thompson, Emeritus Professor Ken Plummer and Dr Neli Demireva of the University of Essex’s Department of Sociology reveal how the thematic concerns of numerous sociological surveys have been shaped by the experiences and backgrounds of the researchers themselves.

Speaking of the project and the book Professor Matthew Woollard, Director of the UK Data Archive, offered the authors his congratulations and commented further: “Pioneering Social Research is the cumulation of over a decade of outstanding research into the earliest sociological studies. Paul, Ken and Neli have shed new light on the methodological approaches used to capture data during this key developmental period, while telling the story of how sociology was founded as a branch of academia. The book serves as both historical record and source of inspiration to new students of the field.”

On Friday 3 September Dr Demireva chaired a webinar to coincide with the book’s publication. The event brought sociologists together, including some of the pioneers themselves and touched on several important questions. Dr Demireva led the discussion of how social research has developed over the last century, which included these questions: “What were the key moments of discovery? Who were these pioneers and what did they study? What impact did this have? Are they relevant to contemporary debates on intersecting inequalities, feminist inquiry, methods, racism and decolonisation?”

Dr Demireva said it was a fascinating event: “More than 50 people turned up today at the virtual Zoom discussion of the recently published Pioneering Social Research book (Policy Press). The event featured presentations from the three authors on the story of the project, shaping the book and favourite interviews, Prof. Paul Thompson, Prof. Ken Plummer and Dr. Neli Demireva, as well as contributions from Prof. Julian Brannen, Prof. Graham Crow, and Prof. Pat Caplan. The event was attended by some of the Pioneers themselves including: Prof. Ann Oakley, Prof Maxine Molyneux, Prof. Pat Caplan, and Prof. Avtar Brah. Paul, Ken and Neli were delighted with the lively discussion.”

You can read more about the project and book on the University of Essex’s newsfeed. Pioneering Social Research: Life Stories of a Generation is published by Policy Press.